It’s Hot! You Deserve a Drink!

If there’s one place you need to drink to stay cool, it’s New Orleans (as though you really need an excuse to drink in New Orleans!) Don’t let the heat get to you – It’s Hot! You deserve a drink! Take advantage of the hot summer. Create your own beverage trail and enjoy original cocktails and craft beer; tour breweries and visit pubs and restaurants all around the city. 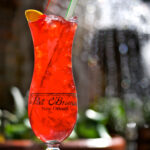 Most everyone who comes to New Orleans has already heard about Pat O’Brien’s world famous “Hurricane”. No trip to New Orleans would be complete without trying this cocktail in the dueling piano bar. The fruity-red rum drink, garnished with a cherry and orange slice, was invented during WWII when whiskey was in short supply. It is served in a Pat O’Brien’s logo souvenir glass.

If craft beer is your style, visit NOLA Brewing Company (just down the street). Its website says they make “Craft Beers by Hand ” in a warehouse on the lake side of a street tourists can’t pronounce.” That street is Tchoupitoulas. Tour the facility on Fridays from 2 -3 pm or Saturdays from 2-4 pm. It sports an upstairs patio overlooking the Mississippi River and barbecue to enjoy.

Other drinks not to be missed on this “beverage trail” are: 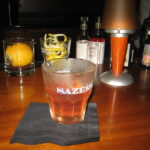 Sazerac: Known as New Orleans’ official cocktail, this is a variation of a Cognac or whiskey cocktail. Some claim it is the oldest-known American cocktail with its origins in pre-Civil War New Orleans, though some dispute this claim. The cocktail is associated with Peychaud, a Creole who began selling his “toddies” in the early 19th century New Orleans. He claimed that the concoction held medicinal properties. Why argue otherwise?

A local treasure, the Ramos Gin Fizz or New Orleans Fizz, is a drink that you will be hard-pressed to find outside of New Orleans. This drink was concocted back in 1888 by Henry Ramos, the great grandfather of a close college friend of the Innkeeper, Bonnie. It contains, among other ingredients, gin, cream and egg whites. It was one of Governor Huey P. Long’s favorites.

There are many more drinks to sample. Why not try to find some of the unique ones on your own? What better time than the summer to book a stay at Grand Victorian Bed and Breakfast and enjoy New Orleans and the drinks that help to make it famous!

This entry was posted on Friday, August 9th, 2019 at 1:02 pm and is filed under New Orleans, News from New Orleans. You can follow any responses to this entry through the RSS 2.0 feed. Both comments and pings are currently closed.