Are you looking for lodging near the 2014 NBA All-Star game? Don’t wait to find out who is on the team to get your reservations for the NBA All-Star Game events to be held in New Orleans, February 13-16.  Bring your sweetheart and celebrate Valentine’s Day weekend off the courts with us!

The fan voting results for the All-Star team are not official until January 20, but you can expect to see some of your favorite players and a few surprises taking part in this showcase of events, with top players competing from both the Eastern and Western Conferences. 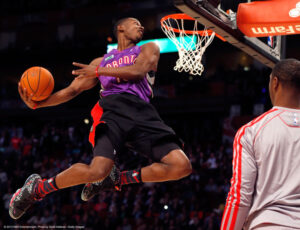 The All-Star Game is on Sunday night, and the halftime show features musical performances by popular artists such as Elton John, Beyoncé, and John Legend.

You can also get tickets to the world’s largest interactive basketball theme park (All Star Jam Session), held at the New Orleans Convention Center. Get your voluntourism experience with the NBA Cares events that give back to the Greater New Orleans community.

New Orleans knows how to do world class sporting events, and all of these experiences are just a streetcar ride away from the Grand Victorian Bed and Breakfast in the historic Garden District.  Join in on the excitement for Valentine’s Day weekend!