Taste Your Way Around New Orleans with Tales of the Cocktail

It’s the tenth anniversary of the world’s premier cocktail festival that happens right here in New Orleans. Tales of the Cocktail® (July 25-29) features a “spirited”array of activities for the professional mixologist as well as the enthusiastic imbiber.

Most of the events take place in the French Quarter, a 15 minute historic streetcar ride from our Garden District Bed and Breakfast.

Well-known bartenders from New Orleans and around the country will create their exotic concoctions during the 5 day schedule. There is something for everyone at this festival with author events, “Spirited Lunches and Dinners” which pair cocktails with meal courses, lectures, demonstrations, and of course, cocktail hours! Almost 30 restaurants from around New Orleans will participate. Some highlights include a recreation of the night before Prohibition at Antoine’s, an evening of barbecue and moonshine at Boucherie and a luncheon honoring the female pioneers of the bar. The dinners and lunches often sell out in June, so make reservations early for this intoxicating festival and while you’re at it make reservations to stay at our historic Garden District B&B.

This year’s “Official Cocktail” is an updated concoction of an Old Fashioned created by contest winner Dominic Venegas of NoMad Hotel in New York City. It’s called the “Rum Row Old Fashioned.” You will get plenty of opportunitiies to taste it during the festival.

The Sazerac Started it All… 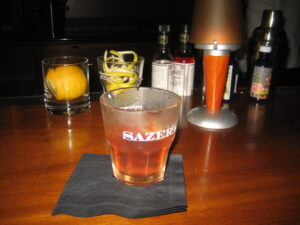 Sazerac at the Roosevelt Hotel

Legend has it that the first true cocktail, the Sazerac, was mixed in New Orleans in the early 19th century by a pharmacist named Antoine Amadee Peychaud. When Monsieur Peychaud poured the mixture of his family’s recipe for stomach bitters and French brandy into double-end egg cups known as coquetiers (pronounced koh-kuh-TYAYS) the pronunciation came out like “cocktail.”

“Tales of the Cocktail” was conceived in 2003 to commemorate this auspicious beginning and has become one of the city’s favorite celebrations.

Celebrate the Sazerac and take the streetcar back to our Garden District B&B where you can enjoy libations and the view from our porte cochere balcony. Check out our summer specials for an extra reason to spend a few days sipping in the city.

This entry was posted on Tuesday, June 5th, 2012 at 10:01 am and is filed under News from New Orleans. You can follow any responses to this entry through the RSS 2.0 feed. Both comments and pings are currently closed.