The Top 5 Seafood Restaurants in the New Orleans Area!

Last week, we penned a Love Note to Louisiana Seafood; now that we’ve extolled its virtues, here is our top 5 list of where to get it. The restaurants are recommended by staff (and guests) and in close proximity to our New Orleans bed and breakfast.

1. Jacques-Imo’s is best described by Bonnie Rabe’s favorite menu item, the Innkeeper of New Orleans Garden District bed and breakfast “Godzilla meets fried green tomatoes.” This Carrollton area restaurant is a perennial favorite because there are always different kinds of fish prepared in a variety ways. A perusal of their current menu lists over 20 seafood entrees from Fried Mirliton with Oysters to Amberjack Provencal. They only take reservations for large groups, so hit this popular eatery early. 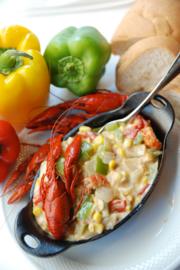 2.  Mandina’s has been a mid-city institution since 1932, and the post-Katrina renovation is bigger and better. Check out the “House Specials” menu for our favorites including Trout Meuniere, Grilled Shrimp over Pasta Bordelaise and of course, their famous Turtle Soup.

3.  Superior Seafood is the new kid on the block that has an old New Orleans feel to it. It is located on the historic streetcar corner of St. Charles and Napoleon Avenue. It features an oyster bar including a sampler plate that serves two traditional New Orleans fare–Bienville and Rockefeller–plus something new called “Angels on Horseback.”

4.  Guy’s PoBoys – 5257 Magazine, New Orleans, LA, 504-891-5025. It is the proverbial hole-in-the-wall as Guy’s doesn’t even have a website and takes cash only. Sit down for a few minutes as all the po-boys are individually made by the owner. Hang out with the locals, have a Barq’s Rootbeer, and talk about the daily news as this is a nostalgic place of days-gone-by.

5.  La Thai may sound strange to some as we have a Thai restaurant on our list, but Chef Merlin’s Jumbo Lump Crab Cake is what keeps us coming back on a regular basis! Chef Merlin has won several seafood awards including 1st Runner Up as the King of Louisiana Seafood, 2010-2011. 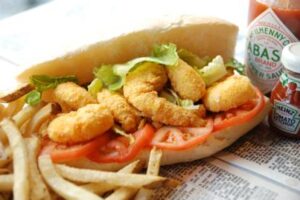 This is by no means a comprehensive list of the best seafood restaurants in New Orleans, so you’ll have to make several trips to the Garden District bed and breakfast to experience them all.

This entry was posted on Tuesday, May 29th, 2012 at 9:02 am and is filed under Dining, Top 5. You can follow any responses to this entry through the RSS 2.0 feed. Both comments and pings are currently closed.