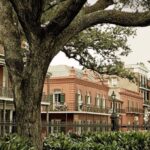 Love history? When you visit New Orleans, plan your itinerary with time to visit some of the many historic homes and buildings located throughout the city. New Orleans contains some of the nation’s oldest examples of original French, Spanish, and American architecture. Some of New Orleans’ most distinguished residents lived in homes which have now become museums scattered throughout the city just waiting for you to tour. Here are just a few suggestions:

Gallier House, located on Royal Street in the French Quarter, is a historic home and museum. It was built as a family home by James and James, Jr. Gallier, a prominent father and son architectural firm in the mid-1800s. This father and son firm built a number of famous landmarks which still exist today, including Greek revival-style Gallier Hall on St. Charles Avenue, the Pontabla Apartments on Jackson Square, and the Leeds Building which houses the Preservation Resource Center. The balcony of the home, featuring wrought iron arches and ornate iron latticework, overlooks historic Royal Street. The rear of the structure features a restored slave quarter apartment. Tours are offered at this home.

The Hermann-Grima House, located on St. Louis Street in the French Quarter, offers tours of this museum and historic home. The home is thought to be one of the finest examples of American architecture in the New Orleans area. Included in the tour are the original stables, the outdoor kitchen with the open hearth for cooking, and a courtyard.

Pitot House sits on Bayou St. John, which was the key waterway leading into New Orleans in the 1700s. Though there were many built like it, this is the only home that still stands of that era. It is a classic example of 18th-century Creole Colonial architecture. It is the only Creole Colonial-style house museum in New Orleans. Guided tours are offered.

Degas House is located on Esplanade Avenue near City Park. For a period of time during 1872 to 1873, Edgar Dégas lived there with his maternal relatives, the Musson family, who were prominent cotton brokers in New Orleans. During the time Edgar Dégas lived at Degas House, he created 18 paintings and four drawings, some depicting his New Orleans family members. Built in 1850, the Degas mansion features two homes with a courtyard in between. Once a single structure, the house was divided into two homes in the 1920s. Daily tours are available.

The 1850 House is located on St. Ann Street in Jackson Square. This museum and historic home depicts middle-class family life during the most prosperous era In New Orleans history. These buildings are believed to be the oldest apartment homes in the United States. Tours are available.

The Old Absinthe House has existed in the Vieux Carre in the heart of the French Quarter since 1815. It is rumored that Pirate Jean Lafitte and Andrew Jackson planned the victory of the Battle of New Orleans on the second floor. Stop by for a drink and enjoy the history of this fine old ediface.

The US Custom House is one of the oldest and most important federal structures in the Southern United States. The construction of this monumental granite building was begun in 1848 and took over 33 years to be completed. It features a Grand Marble Hall in the center of the ediface. It is located a few blocks from the Mississippi River on Canal Street. The exterior of the US custom House retains its original design of modified Greek and Egyptian revival elements. 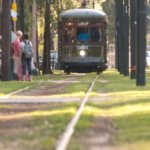 These are only a few of the vast amount of historic structures for you to visit in New Orleans. Choose the Grand Victorian Bed and Breakfast for your New Orleans stay. This bed and breakfast, built in 1893, offers easy access to the many historic homes and buildings since the St. Charles Avenue Streetcar runs in front of the home.

This entry was posted on Tuesday, October 15th, 2019 at 9:16 am and is filed under French Quarter, New Orleans. You can follow any responses to this entry through the RSS 2.0 feed. Both comments and pings are currently closed.